A long, five-year journey is quickly coming to an end for Harley-Davidson’s “Project Livewire.” Nobody knows yet whether it’ll mark the beginning of a new century for the motor company, leading with technology the way that it has led with lifestyle and brand marketing in the latter half of the 1900s. Or whether it’ll become another product in a long line of motorcycles that offered too little, too late in an effort to draw in a new generation of riders. One thing is certain already, though: Harley has shown that it can build an amazing electric motorcycle that is a joy to ride.

2014’s tour of an H-D electric concept generated a lot of excitement by blending three awesome things: motorcycles, zero-emissions electric tech, and the legendary Harley-Davidson brand. In a letter of support to HDMC, I urged them to blend three more awesome things: get to market first, handily beat competitors’ range specs, and land Livewire at a price that was accessible to a new generation of riders…

Come in at or under $12,000. If you overvalue your brand and expect to get $20,000 for Livewire, you’ll scale about as well as Brammo has at $19,000. That’s not Harley scale. Premium exclusivity might work for a short period of time, but don’t try to extend it to the point of irrelevance.

Harley achieved none of those goals.

While the industry waited, H-D took over five years to bring Livewire to market, during which we saw Brammo purchased and extinguished while Zero Motorcycles rose to lead the market with specs and price. But the truth is that the five years don’t matter as much as the specs and the price. Those five years gave us the benefit of Tesla alleviating range anxiety in EVs thanks to their battery technology and supercharging network. Five years also allowed Harley to create a stunningly well-built, beautifully designed, and uncharacteristically high-performance motorcycle in Livewire.

But what of specs and price? At $30,000, Livewire is obviously designed to be a halo product… an ultra-exclusive attractant to a brand that cashes in on the masses purchasing follow-up, more accessible derivatives. Witness the Tesla Roadster versus the Model 3, or the Apple Watch Edition versus the aluminum Series 4 of today. If Livewire had a clear spec advantage over competitors like Zero who sell for a third less, the $30K price tag might be a little less insane, but not much. As it stands, it smacks of tone-deafness and inner conflict at Harley.

Test riding ahead of availability

The production Livewire bikes are being built now and will be delivered to pre-order customers like me in the coming weeks. A handful of final-spec production units are touring the country for test rides. They’re garnering very positive reviews from moto-industry journalists, which is great to see. They’re also giving customers a chance to experience the real Livewire, on real roads. I met up with a team of Livewire experts from both HDMC as well as our local dealership, Eastside Harley-Davidson, for a test ride this morning. This is how it went…

Harley is conducting these test ride meetups at cool motorcycle-centric locations, which is brilliant. Here in Seattle, it was at The Wick Motorcycle & Coffee, a cool local spot deeply influenced by the local hipster moto community. This was likely a more inviting spot to a broader community of riders than a local H-D dealership would have been. Plus the coffee is great at The Wick.

It was nice to have different makes of bikes coming and going, removing some of the bullshit Harley-Davidson brand exclusivity that will harm the motor company more than it will help it in the coming decade. It was also cool to have a block of street closed off for the Livewire, making it easy to get great photos and chat up the bikes with other riders.

They had all 3 colors of Livewire available to see and ride. My pre-order is the orange. It looks even better in person, slightly darker with a burnt tone. I’m glad I chose it. 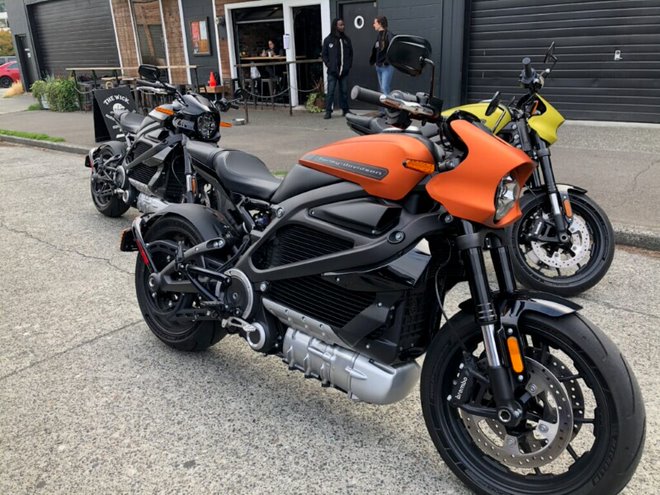 The event felt well-organized by experts. When I arrived, they had a greeting table to check me in. This is where they make sure you have a license and endorsement.

From there, riders are ushered onto a fixed-position test bike to learn the controls and how the display works. It only takes a minute or two for seasoned riders. 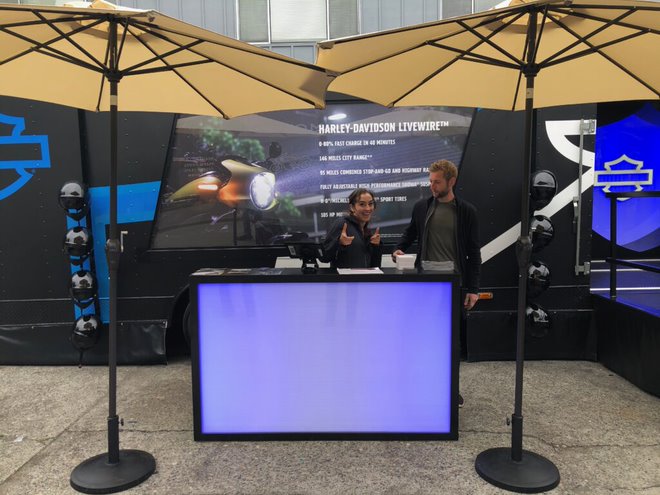 A slight miss is that they should have had record of me riding the prototype Project Livewire five years ago, and allowed me to bypass the repeat training. But hey, you don’t become a tech company overnight. Rider profiles will one day be more valuable to H-D than the designs of their motorcycles.

There was a chance to ask questions and talk to experts in between test rides. These included factory and dealership personnel. The team of people organizing the rides and answering questions was extremely knowledgeable. Lorie, the district rep below, is working on getting the cool Livewire shirts available ASAP. 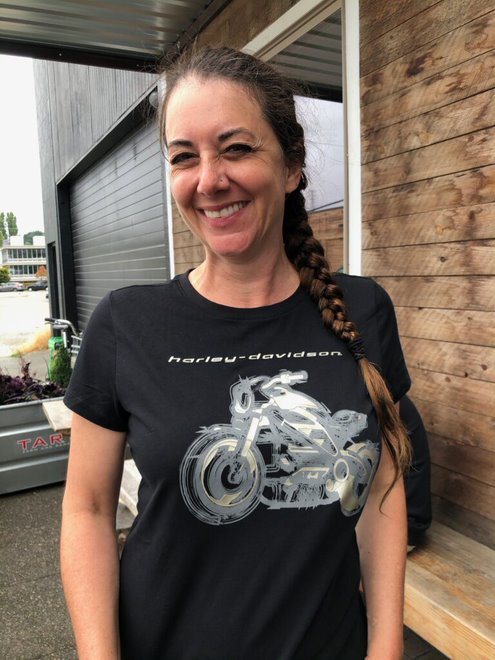 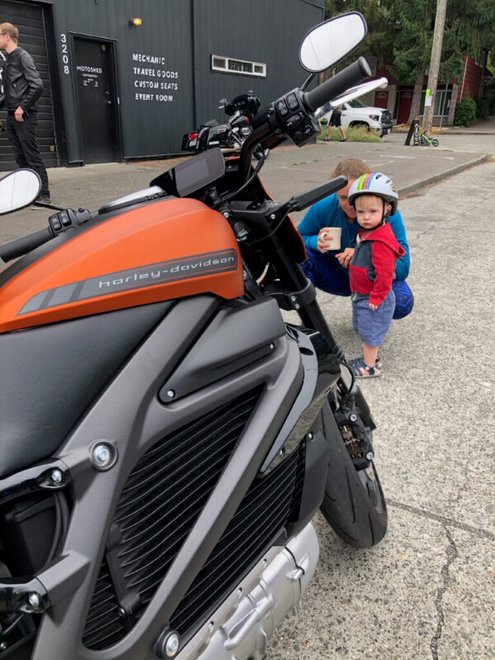 Unfortunately, this Livewire test ride had guide and sweep bikes that were loud big-twin petrol motorcycles. For people that don’t ride in groups, that means a motorcycle in front to guide everyone along a route, and a motorcycle in back to ensure nobody falls behind. That in itself isn’t abnormal. In this case, it was apparently due to some test riders going rogue in another city and damaging a motorcycle, so a guide and sweep were added here in Seattle.

There were extra Livewires on hand at the event, and they should have been used for the guide and sweep positions. As it was, the ICE (“internal combustion engine”) bikes generated so much noise that most footage sounds like the traditional loud Harleys instead of Livewire’s signature electric-jetfighter-scream.

In person, the production Livewire’s design significantly exceeded my expectations. To my eye, it’s a beautiful bike that just happens to be electric. The build quality seemed impeccable, with high-end components used everywhere. I had a few questions about the onboard software, which a factory rep answered favorably. I’m accustomed to my Tesla’s driver feedback, and Livewire includes many similar features. Of course, the real story of the day was the ride. Because the sound of Livewire is unique and different from any petrol motorcycle that H-D has ever built, I left the audio from my test-ride unedited. Off the line, you’ll hear the wind-up of the drive gears, followed by a lot of wind at speed.

There was a stretch of road where I opened it up a bit, passing at about 80 miles/hour. This was broken into three acceleration stages:

Delivery is only weeks away!

There should be no doubt in anyone’s mind that Livewire is an amazing motorcycle. It’s not for everybody. In fact, most of Harley-Davidson’s customers will continue buying big-twins for years to come, and they’ll enjoy the sound and instant range that they get from gasoline motorcycles.

For people that have been pleading for Harley to modernize and diversify their product line for years, this is what we’ve been waiting for. It’s a sporty, clean, efficient, zero-emissions acceleration machine that will handle corners better than anything the motorcycle company has ever produced before.