I grew up in Oregon, but never did see Crater Lake or the California’s Redwoods as a child. They’re two natural wonders that fascinated me all my life. In 2013, I decided that seeing these two natural treasures would make an excellent motorcycle ride.

…and did it ever.

July 11, 2013 was the day to depart Seattle. My family was in Seaside, Oregon already and heading directly from Seattle to the Oregon coast gave me an opportunity to spend the first night with them.

Getting to Highway 101 was the first goal, as that’s where the ride starts to get beautiful, even while still inland. I-405, I-5, and even HWY 8 are mostly just get-through-it routes.

Once you hit 101, you’re on an amazing road down the coast toward Oregon. The weather was nearly perfect — about 70° and sunny — for the ride south.

There are some beautiful stretches once 101 breaks south. Here are a few shots just inland south of Raymond WA, plus a few along the Willapa National Wildlife Refuge. Seaside and Cannon Beach were lots of fun with the family. I’ve been weekending on those beaches since I was first born, having grown up in Portland.

My good riding buddy Walter decided to join me for the ride but had to meet me in Newport, Oregon, as he started the ride a day later. The Oregon coast is pretty spectacular with both long sandy beaches and rocky cliffs. We met up and had lunch at the original Mo’s Seafood, a family favorite. The clam chowder is legendary. Since I was riding for four full days, I figured I’d take the 2012 Harley Davidson Ultraclassic Limited, a big touring bike. It’s nice on rolling highways at normal cruising speeds, and the luggage is very convenient. But it’s heavy. And slow. And lumbering. This affects the trip in unexpected ways later on.

Walter was on a 2010 BMW R1200 RT. While still a larger sport-touring bike, it’s comparatively sprightly.

After lunch, we headed south on 101 under sunny skies with the glorious Pacific Ocean to our throttle side. Riding doesn’t get much better than this. Here are just a couple of minutes of these roads along the ocean.

While the Oregon Coast was theoretically just the route to get to the first destination, it’s an amazing ride in its own right. There are plenty of scenic viewpoints to stop at and stretch your legs, like Haceta Head. 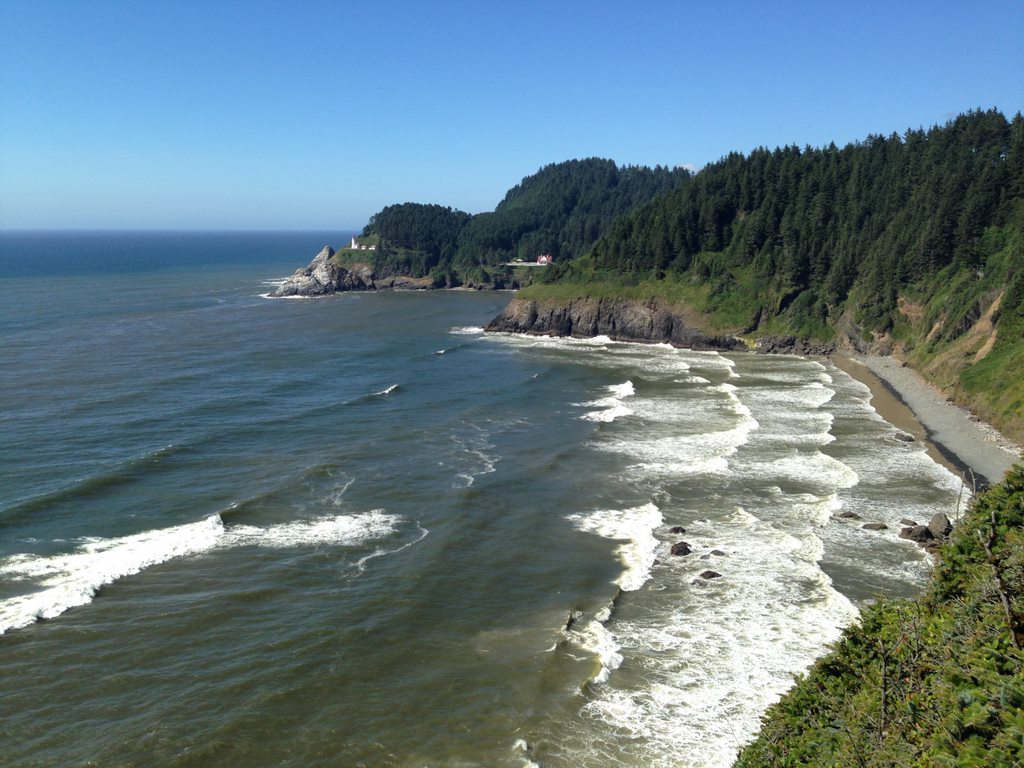 Looking back at the Heceta Head Lighthouse, an Oregon State scenic area.

One interesting surprise was a full-scale Tyrannosaurus Rex lurking on the side of the road. We flew right by on the bikes, and I made a split-second decision to turn in at the final entrance, cutting off Walter’s line. Sorry about that! The pictures were worth it, though. After a spectacular day of riding down the coast, we hit the California border just as the sun was setting, and pulled into Crescent City’s Oceanfront Lodge. Great views, even at dusk.

This was a big day of riding through some of the great natural treasures in western America. But it wound up being one long day with unexpected riding conditions.

Everything started out as planned: we woke up and had breakfast with a dining room full of other riders. At hotels along routes like this, you’ll meet riders from literally all over the country and the continent. Poeple of all ages and backgrounds ride all types of bikes along scenic routes, and it’s fun to chat with them about where they are riding from and to. Everyone was smiles because the weather was perfect: sunny and low 70°s with fresh ocean air.

We continued south on Highway 101. First stop was going to be at one of those drive-through redwood trees. It’s a totally tourist-y thing to do, but I had seen photos as a kid and had always wanted to do it. And how better to drive through a tree than on a bike?

After overshooting the tourist trap in Klamath by about 40 miles, I made poor Walter backtrack and we eventually found the giant tree with a road going through its trunk. We continued into Redwood National Park where we took very few pictures because the riding was so good that we didn’t really want to stop.

We got a few shots of the tallest Redwood on the route, which has its own visitors’ center. Before we knew it, we were through the Redwood forest and climbing eastward into the Bald Hills of the Six Rivers National Forest.

As we rode the border of the Yurok Indian and Happy Valley Indian Reservations, everything was great. Curvy roads, sunny skies, and more great riding ahead of us all day.

The plan was to continue along Bald Hills Road — our planned route — right over the mountains. There were two things I didn’t expect: the temps climbed through the 80s and 90s very quickly.

And then the pavement ended.

Before I go on, it’s worth mentioning some specifics about the bikes that we were on. Walter rode his BMW R1200 RT, a sport-touring bike. It’s not meant for off-road riding. With panniers, it’s over 600 pounds. But it does have a shaft final drive, which is completely safe from any debris.

I was on my Harley-Davidson UltraClassic Limited. I mentioned that it’s a behemoth of a touring bike. Fully loaded, it weighs over 950 pounds with luggage and gear. Worse, it has a kevlar belt final drive. Belt drives are open to the environment, and a single piece of gravel being picked up by the belt could break it, stranding me. A chain would even have been better… anything but a belt. There are few bikes that would be worse to try and handle off of the asphalt.

As the mercury climbed into the very top of the 90s, the immaculate fresh winding asphalt that we were riding across suddenly and unexpectedly ended and turned to coarse gravel. Google Maps never mentioned any pavement ending!

We immediately stopped, and the first words out of our mouths were, “Man, I wish I had the Trimph for this.” We both have more off-road capable machines in our respective garages (Triumph 800XCs), but they did us no good this day. Here’s the 30 seconds before and after the gravel transition:

We rode in about five miles before passing a Jeep coming the other way. We asked him how far until we’d be back on asphalt again, and he said it’s not more than 40 miles or so. We thought he was joking. He wasn’t.

While these gravel roads were reasonably well-groomed, it was still a very tense ride. You can see that they degraded a bit as we climbed; my steering was terrible and the bike a nightmare to ride on any surface other than tarmac. Worse, the temperatures climed to 103°, so we were crawling along in dust, at slow speeds, in full riding gear.

An hour later, we were back on tarmac and feeling pretty shattered. A twisty road wound down out of the hills, making for much better riding — especially through cooler stretches in the forest shade.

Bald Hills Road dropped down into the middle of nowhere, but it was a beautiful nowhere. With no cellular service, we needed to find a town to double-check that we were on the right route. Fueled and hydrated in a town with a population numbering about twenty, and we were back on our way.

Next stop was in Grants Pass, Oregon for a quick lunch and then onto Crater Lake itself. Crater Lake formed about 7,700 years ago when Mount Mazama collapsed after a big eruption. The crater that resulted collected snowmelt over the millennia, forming the deepest lake in the United States at 589 meters (1,932 ft). It’s home to Wizard Island, which formed from a cinder cone in a later eruptoin. This was the scene that I most wanted to see on this trip.

Approaching Crater Lake was breathtaking. Highway 62 winds through beautiful farmland, climbing to Munson Valley Road which takes one to the crater rim. From there, the views were incredible. 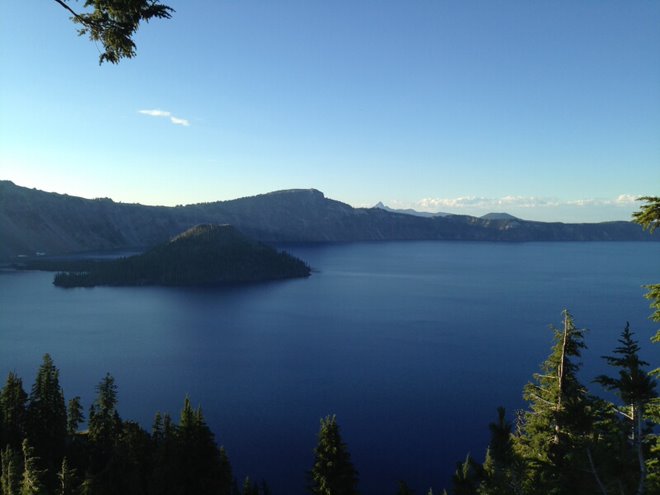 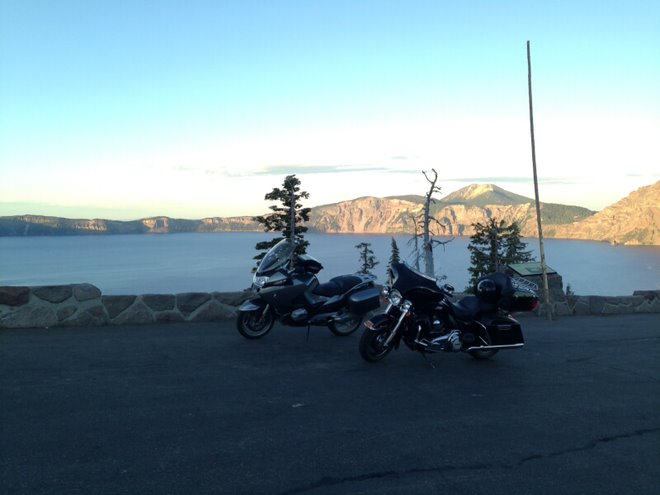 It had already been a pretty long day, and as you can see from the shadows, the sun was low in the sky. Our plan was to ride to Bend, Oregon for the night via SR 97, so we had over a hundred miles of riding still ahead of us, some of which would be in the dark.

Who would think that almost every single room in Bend would be taken already? Thanks to my wife, Lori, for doing legwork online to find us a place to stay. With several hundred miles across a variety of surfaces behind us this day, some quick bar food and a few beers were all that stood between us and a good night’s sleep.

Day 4: Bend to Seattle (via the great riding routes) 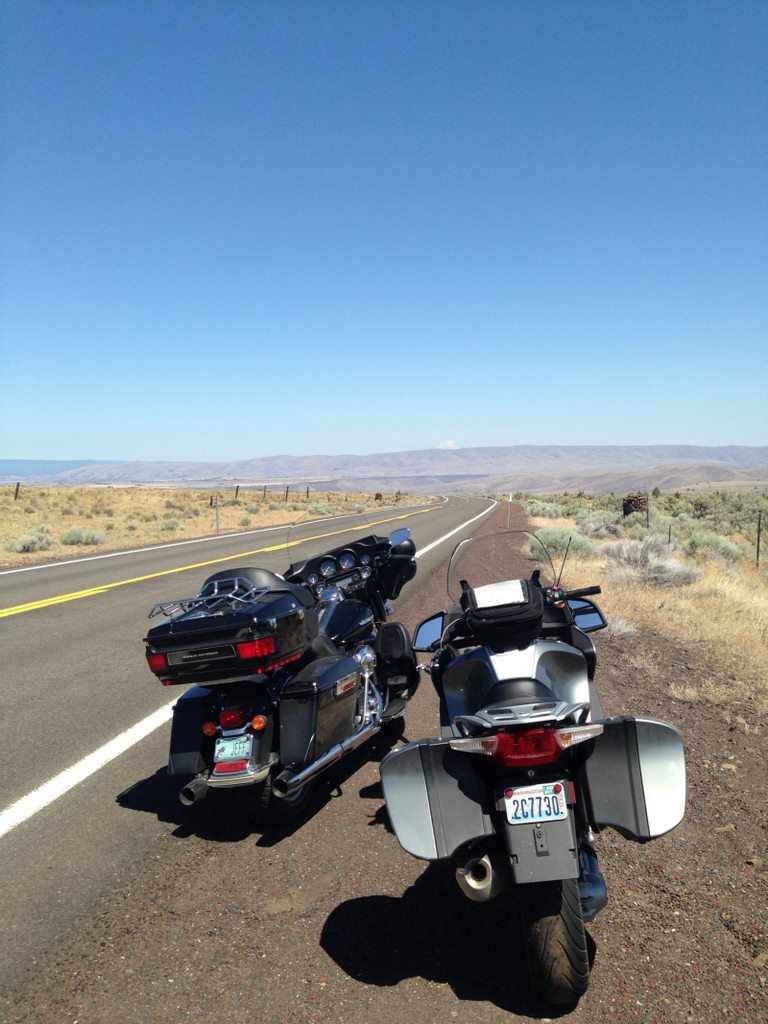 Bend is a really great town to visit, and the fresh eastern Oregon air was the perfect start to the final day of riding. We took scenic SR 97 up to the twisty 197, through beautiful ranch lands (at left) before dropping into The Dalles for an early lunch. The Rivertap Pub was quite good.

From here, we were back in familiar territory. The head of one of my top five favorite roads in Washington was just a few miles from lunch: State Route 142 in Klickitat County.

SR142 is 35 miles of road that wind along the Klickitat River, up canyon walls, and eventually over the farming plains back to SR 97. It’s great riding for any type of motorcyclist, and also great scenery, smells, and even sounds.

If you ride this road, you’ll want to stop once or twice along the river. You’ll hear your own engine sound reflected back to you off of canyon walls in a few stretches. It’s just great riding. 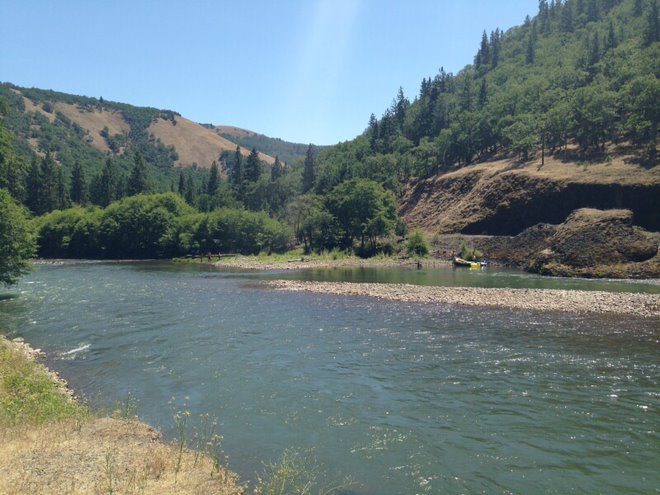 By the time we rode through on 142, it was already in the high 90°s, so we stopped at the river for a few minutes to cool down. The rest of the route was familiar Washington riding: Highway 97 up to Yakima, a quick stint along Canyon River Road (the #1 best motorcycle road in Washington), coffee in Ellensberg, and the the lulling interstate treck home along I-90.

By any measure, this was a fantastic trip. I had wanted to see these two National Parks for decades, and getting to see them via a motorcycle trip with a good friend was the perfect solution.