Two hours north of London is the town of Hinckley, home to the factory that builds Triumph motorcycles. Triumph actually has six factories around the world in England, Thailand, and Brazil. But Hinckley is the heart of the company where all Triumph bikes are designed, and several of the lines manufactured.

While planning our London vacation, my family agreed to a day at the Triumph factory touring the facility, and a trip the legendary Ace Café afterward. It helped that we have a new Triumph in the garage, and we’d be seeing its birthplace. 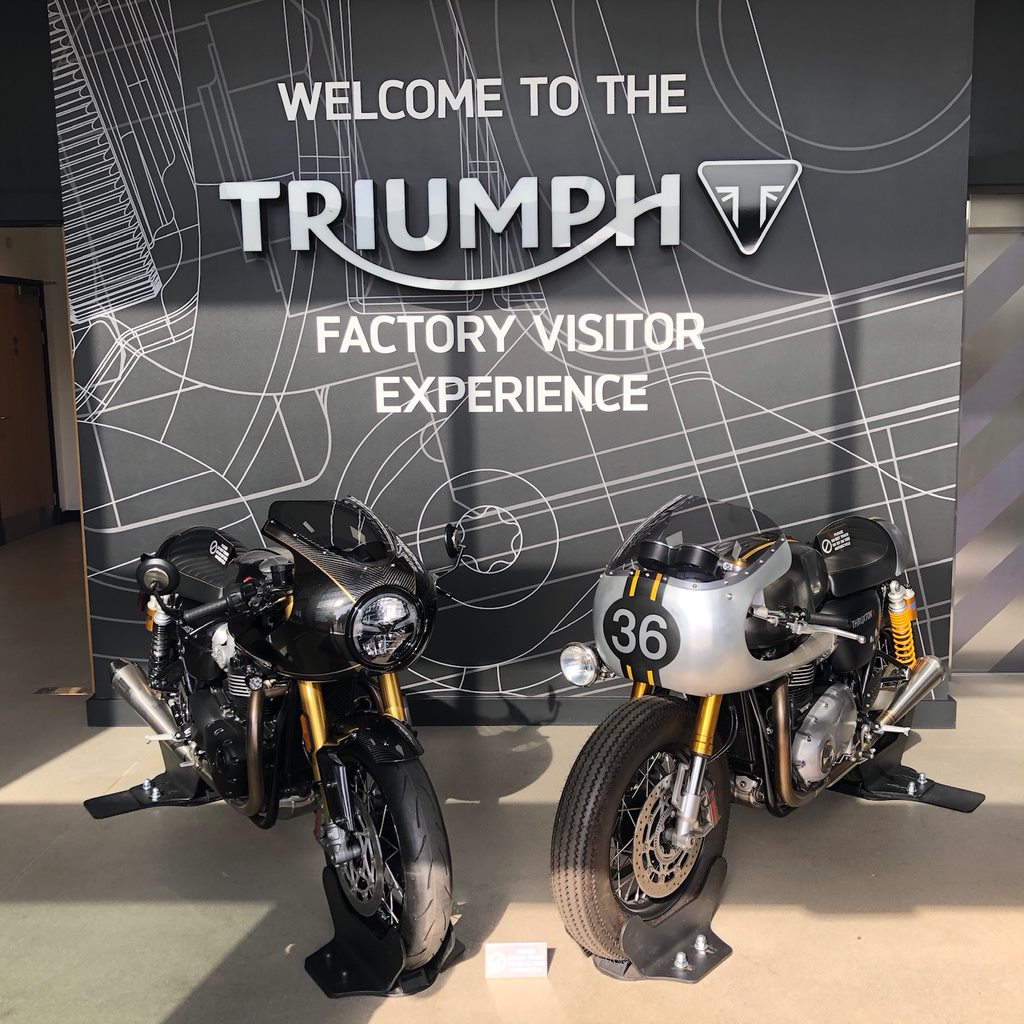 The Triumph Factory Visitor Experience will take a few hours at least, and over half a day if you’re a motorcycle enthusiast. We arrived in the morning over an hour before our tour was scheduled to begin.

The first thing we noticed was the 1902 Café, which is positioned right outside of the tour launching point. The café - even by itself - is well worth a visit to the facility! It has rare motorcycles positioned between the tables, some of which they ask you to sit on. They also have a cool “wall of engines” and there are MotoGP races playing for you to enjoy while you drink your 1902 Café espresso. If you aren’t a Triumph fan when you arrive, you will be by the time you’ve finished your coffee. 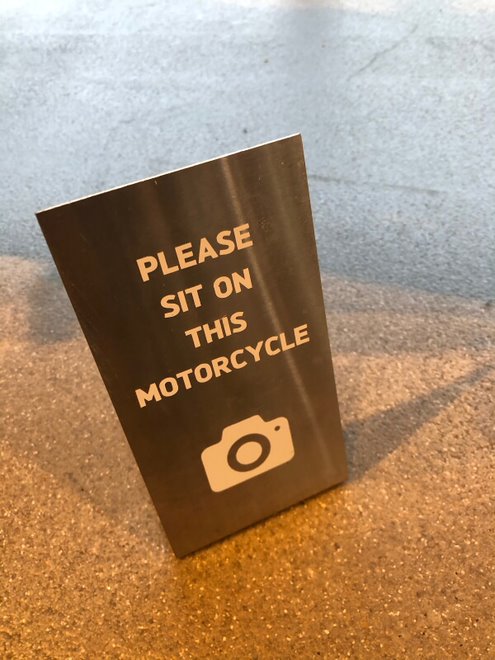 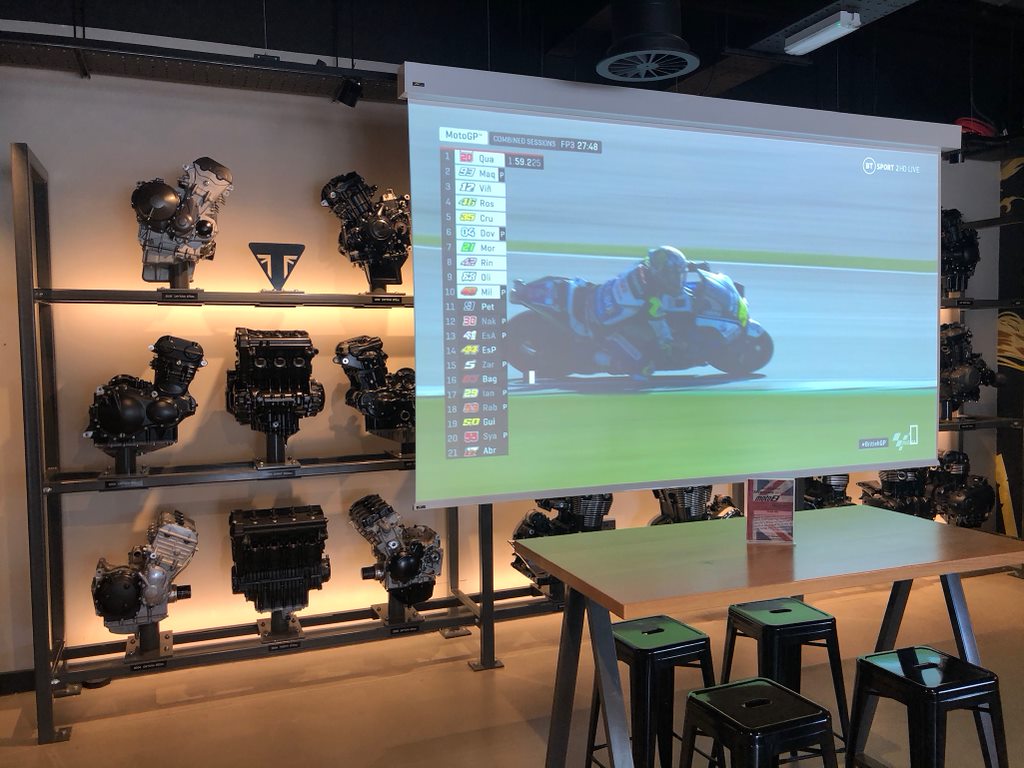 Nearly all of the factory visitor experience is free, and we spent an hour checking it out. The foyer that separates the 1902 Café from the free exhibits has motorcycles hanging from the ceiling.

Through that foyer we found the entrance to the historical exhhibits. These are a walking history of the bikes, the brand, and the technology that make up Triumph. The timeline starts with Triumph #1, from 1902. 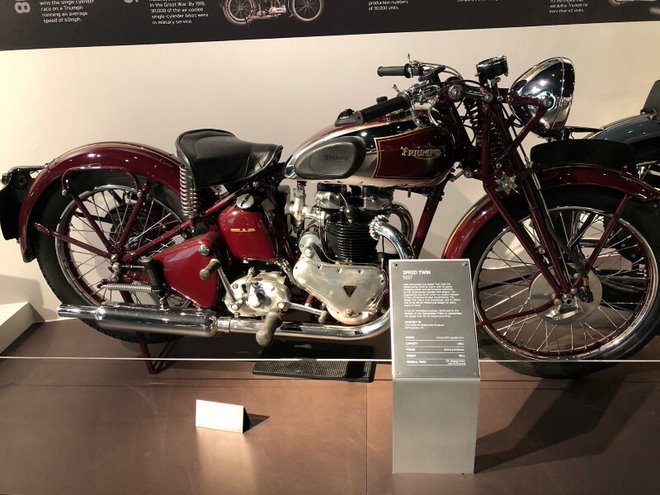 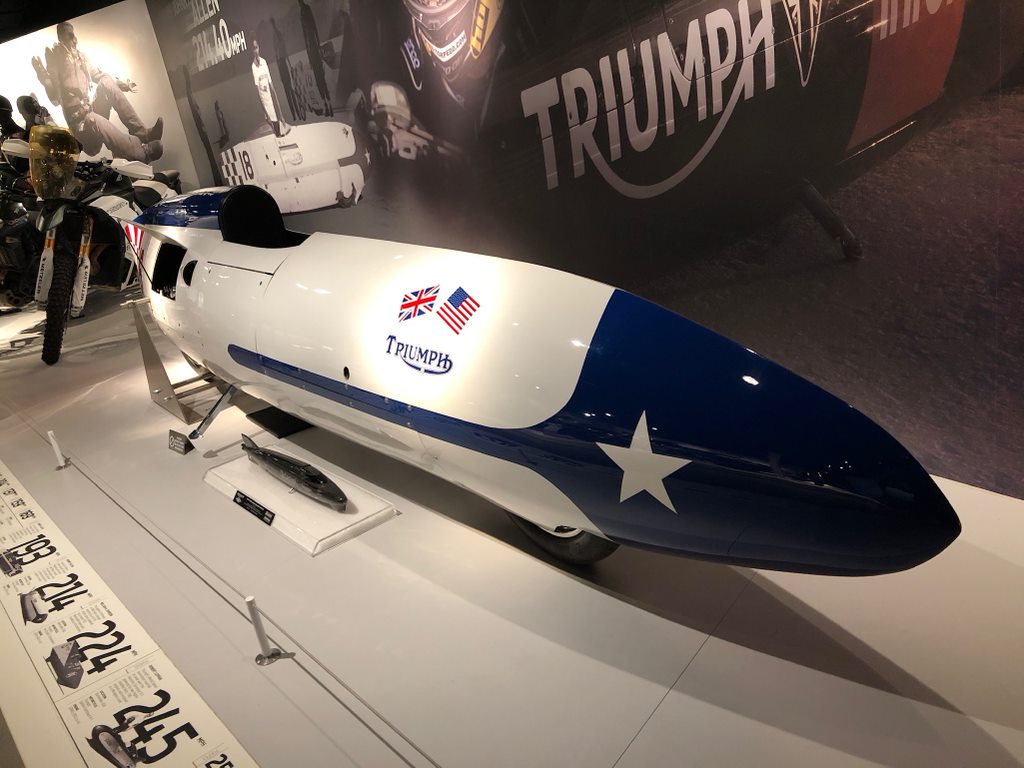 Around another bend lies some of the most legendary motorcycles in the history of the sport: bikes that have appeared in films and been memorialized in pop culture. The highlight of these exhibits for me was seeing the original 1962 TR6 Trophy ridden by Steve McQueen in the 1963 film The Great Escape. 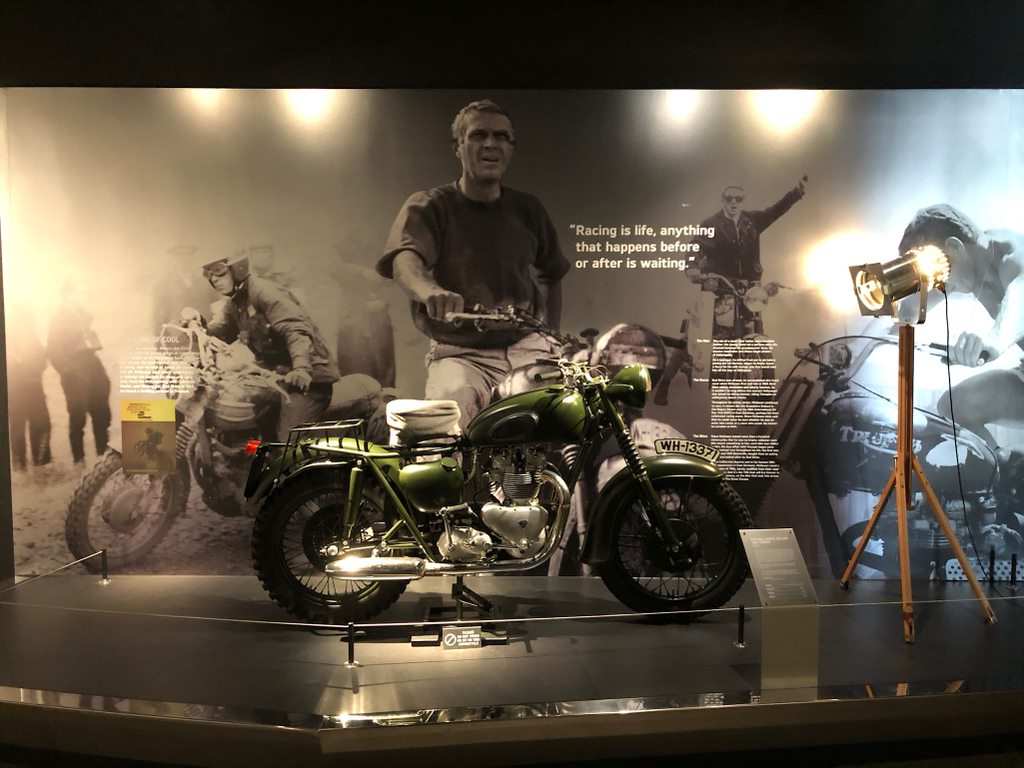 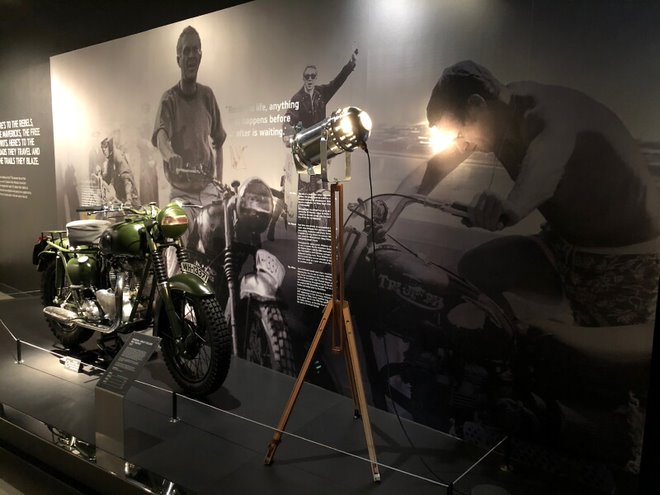 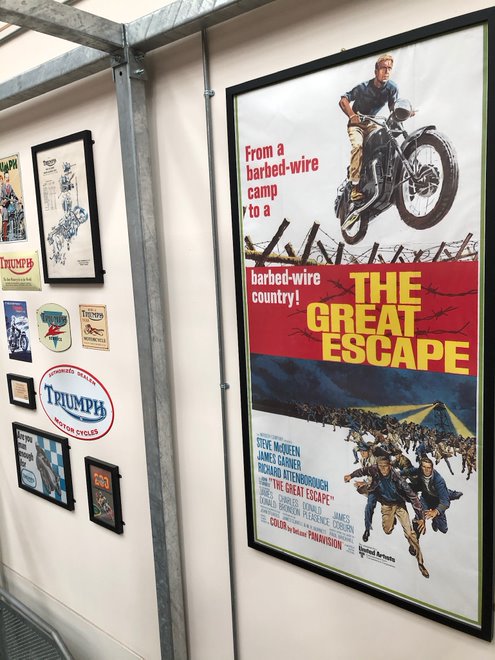 Bikes belonging to - or ridden by - David Beckham, Brad Pitt, and many more were on display. Of course there were lots of stills from films like The Wild One (Marlon Brando) and Quadrophenia. They even commemorate visits from British royalty. 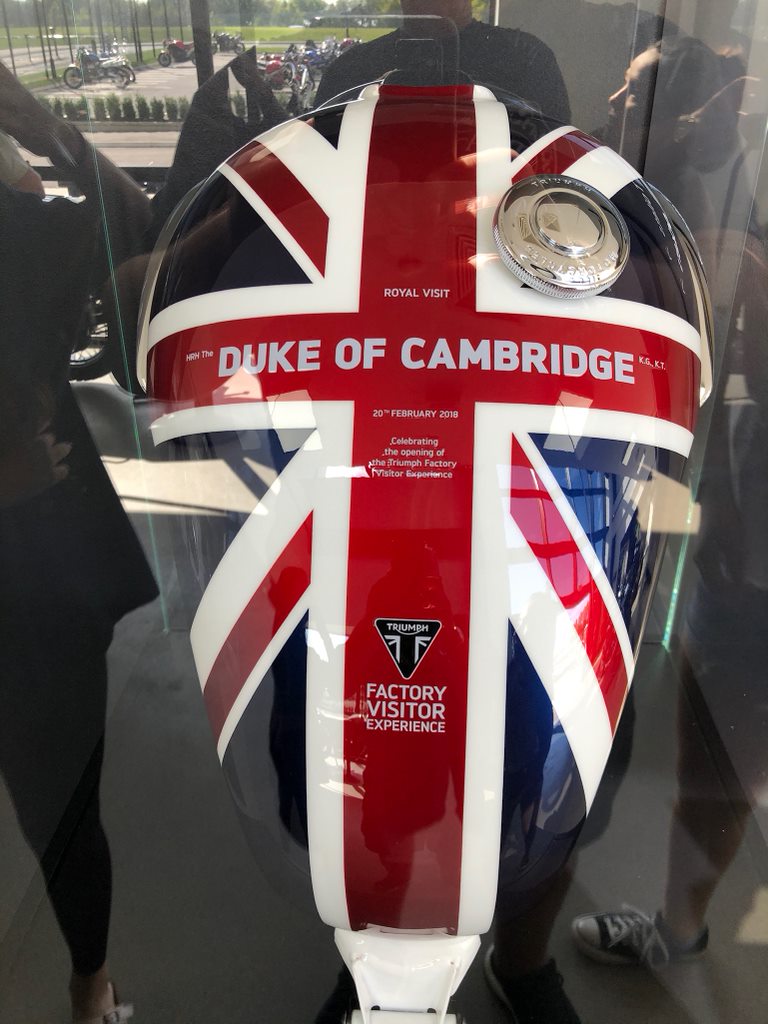 There are usually a few seasonal exhibits to see. At the time of this writing in May, 2020, the newly-launched Rocket 3 has a dedicated exhibit. As you make your way back toward the 1902 Café for the tour to begin, you get to read about how the concept desigh and production process work. You even get a few glimpses into the factory itself, but only of the massive stories of parts ready to feed production lines. They block the interesting stuff. 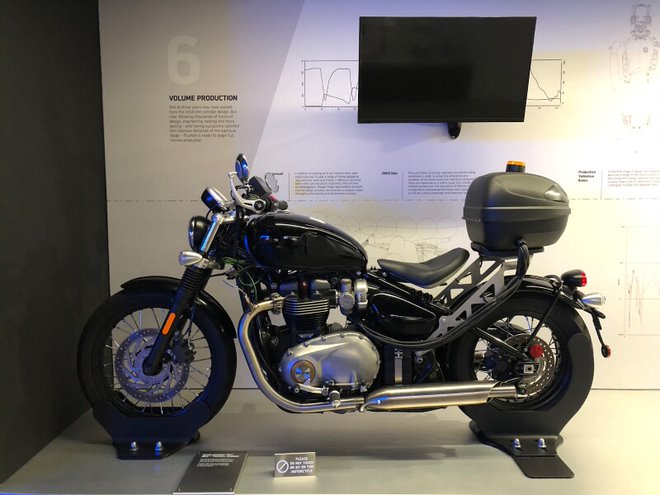 As the tour begins, the photos stop. After you pass through the big 1902 vault door, you’re on the factory floor and no photos are allowed. You get an earbud to hear the tour guide, and are guided through everything from concept design (totally closed to tour view) to machining (we spent half an hour on crankshafts alone!), to fabrication, to assembly, to paint, and packing/shipping. Our guide was not only knowledgeable, but also very entertaining. He made it fun for enthusiasts and non-enthusaiasts alike. Our tour party had about 20 people, and our guide discovered that my daughter was the only Triumph owner in the bunch!

A few things struck me as particuarly important to Triumph: At the very end of the tour, as we exited the packing and shipping area, we got a glimpse of about 35 Rocket 3s. They were nearly complete, some missing just a few parts. These 2.5-liter monsters had been announced but were not yet available… and here was an entire fleet of them. I asked our tour guide about them, and he said that they were the very first batch of press bikes being prepared for the official production unveiling events and would be the first Rocket 3s ridden by non-Triumph employees. I was left to drool as I walked by.

When our tour was ending and we approached the exit, I talked to our guide about the Rocket 3s again. He rememberd my daughter as the new Triumph owner. I really wanted to sit on one of the new Rockets before even motorcycle press got to. Our guide could tell how excited I was about the bikes, but was clear that it’s very much against the rules for him to take guests back into the factory after a tour, and even worse for him to take us off of the tour path to get access to incomplete bikes. But he did! It was like an adventure because as another tour group was advancing, we had to hide inside a paint booth and wait for them to pass. After that, I got to sit on these incredible new machines before production was even complete. It was awfully exciting, to say the least. Our tour guide achieved hero status for that.

If you are interested in Triumph motorcycles, or fascinated at all with design and production, the Triumph Factory Visitor Experience is guaranteed to be worth your time. If you’re a serious enthusiast, plan to spend most of a day at the factory. There are many more photos from our visit here..

When you’re done, head over to the Ace Café in London. With that, your Brit-bike day will be complete!