Getting out for extended rides has been an important part of my life over the years, but recently the bike has been garaged while I’ve dealt with a lot of change. We moved homes, I retired from Microsoft, and of course COVID has had an impact on all of our activites. It felt great to break the caged streak with an end-of-season North Cascades loop with my buddy Greg. Since the Mariners didn’t have a game four, we started out on Sunday afternoon, the 16th, without much of a plan other than a night up in Twisp, WA. Here’s how the route unfolded:

Heading east over Highway 2 we encountered active forest fires. Signs warned the the pass was closed, but a quick check of @WSDOT updated the status to open again, as fire crews had finished their work for the day. We weren’t really prepared for what we were about to ride through, though: Active fires still burning along the roadside, scorched trees and brush, and trees felled across shoulder barriers as the crews worked to prevent spread. It was like driving through a post-apocolyptic movie scene.

At Stevens Pass, everything cleared up as we descended toward Leavenworth. Leavenworth is the trying-hard-to-be-German town in “Washington’s Alps” (the Cascades), and we arrived there just in time for some afternoon sun on fall colors, and a very good German meal at Andreas Keller Restaurant. That’s my bratwurst with German potato salad, rott kraut, and an apfel strudel. 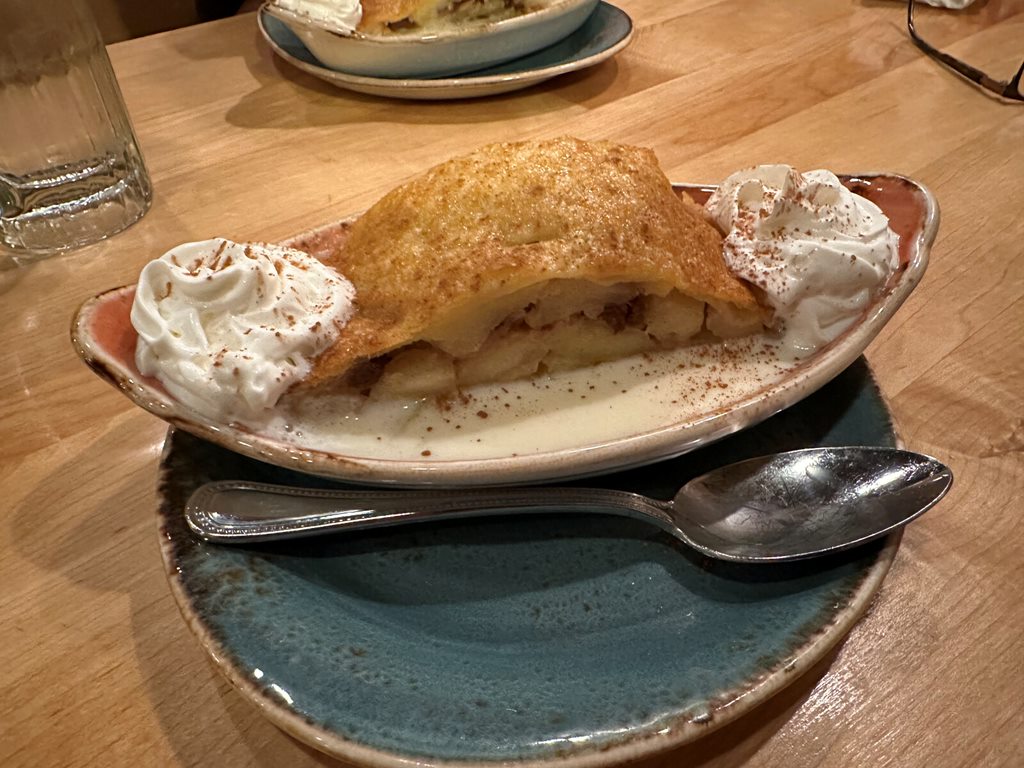 We continued on to Wenatchee, where we found a hotel right on the Columbia. Drinks in the lobby capped off a great afternoon of riding. We’d left temperatures close to 90º in Seattle, and enjoyed low 70ºs east of the mountains.

Based upon multiple strong recommendations from locals, we went to breakfast on Monday morning at a place called The Wild Huckleberry in Wenatchee. Everyone raved about their huckleberry pancakes being delicions and “the size of old-fashioned flapjacks.” They weren’t kidding.

The slow morning start worked out well because it gave the mercury a chance to rise a bit before we hit the road. We rode up Highways 2 and 97 into Omak for lunch, and then east to Omak Lake. I had ridden through here years earlier and remembered the two-lane road that runs along the lake as being an ideal motorcycle road: twisty, good asphalt, and no traffic. It was every bit as nice to ride as I remembered, until we were suddenly stopped by a big black bear meandering around in the road!

We stopped a good distance shy of him, but he still saw us and decided to see what we were about (or perhaps whether we’d make a good lunch). 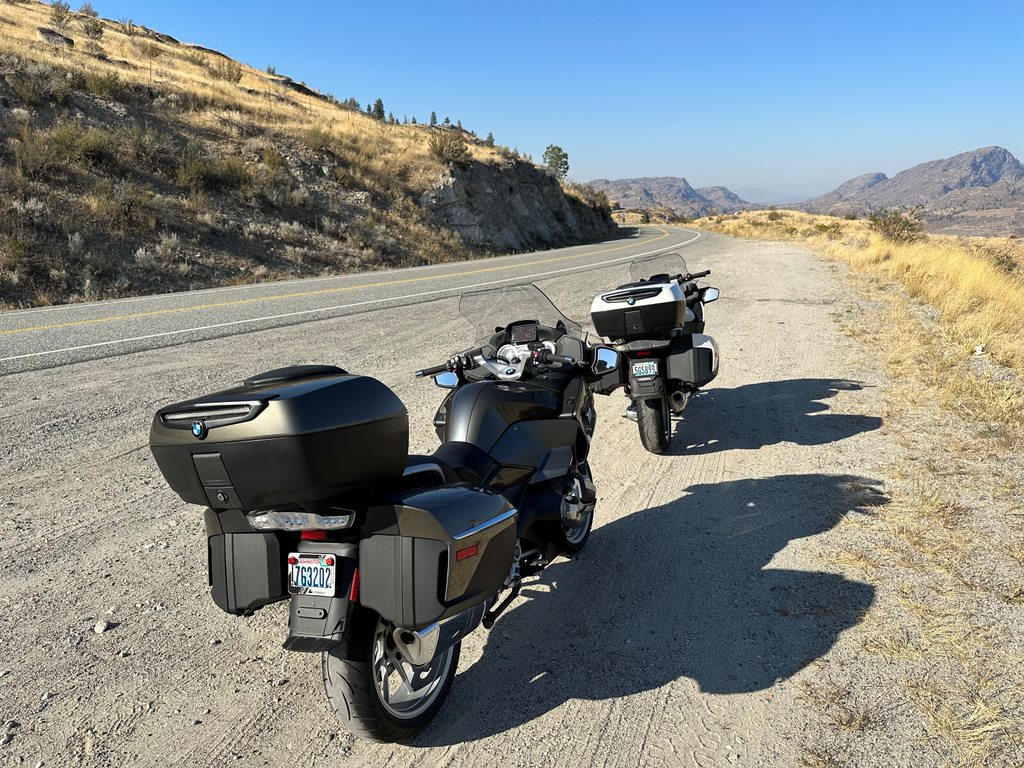 As we rode past him, we could see him standing on his hind legs to see us. The bear was good motivation to head back west to Twisp, where we had rooms at the Twisp River Suites. This place was perfect, with nice suites, friendly staff, and a cool patio with fires to sit by right on the river. It was a great place to chill after a great day of riding.

My favorite coffee in the world is from Twisp, coincidentally. Blue Star Coffee Roasters opened a new shop in May of 2021, and we used this chance to have breakfast there.

Riding west early in the morning was cold. At one point, the bike registered 33º in a shady valley. As we climbed, sunny slopes would be warmer - into the mid 40s - but as soon as we dropped into the next valley, the chill would hit again. This makes for tough riding as you tend to stiffen up and burn energy when cold. Good gear helps, but riding in the 30s is just cold and exhausting.

Once we got over the summit, we hit the worst smoke that I have ever seen. Lori said that she saw AQIs of over 300 where we were riding. Smoke from wildfires was so thick that we rode with our hazard lights flashing for a while for added visibility. It was hard to see more than ten yards in front of the bike. Overall, an exhausting ride back to home, but we did it safely.

The weather forecast calls for the Pineapple Express to arrive here from Hawaii on Friday, and with it comes the “atmospheric river” and days, perhaps weeks, of continuous rain. Greg and I made perfect use of these last few sunny days, which is amazing for mid-October in our area.